"A man should rely on his own resources; the one who so trains himself is ready for any emergency."

Man is designed to function independently and to rely on the Creator for his resources. If we build our relationship with the Great Spirit, we are ready when emergencies occur. We need to build a trusting relationship with the Creator. We do this by constantly talking with the Creator. It's good to talk to Him many times a day. Then we will realize, even though we can't see Him, that He is always with us and He is ready to respond to our requests.


God, let me remember to talk to You many times today.

Sometimes it is hard for me to be in a place where I can "constantly" talk with the Creator. Being a working mother & wife as many women are nowadays makes it difficult to take a break from the "Business" of life.
During the Winter months I cannot physically ground & connect with the Great Spirit as I enjoy doing in my gardens during Spring, Summer & Fall. So, it is very important for me to be more conscious of remembering to connect.
It is important to take those breaks; pause, breathe, ground & pray. I find myself needing to do this more often during this stressful time of year and it helps. Connecting with the Great Spirit several times throughout the day keeps me from loosing my temper, or from being frustrated or inpatient with others.
Connecting with the Great Spirit on a regular basis keeps me happy, calm, fulfilled. A better Mother, Wife, Daughter & Friend.
Warmest Blessings ~ Sheilia Canada
Posted by Sheilia at 6:09 AM No comments: Links to this post

The following was shared with me today & I felt the need to share these wise words of Charles Bird King Red Jacket (Seneca) with others also.
His whole speech resonated with me such simple truth & is the best way I have seen as of yet, that describes my Spirituality & the legitimacy or right I have to be part of it over what other people may deem "acceptable worship".

In a discourse about Amerindian tolerance for the differences of others, Ronald Wright, in his history,* Stolen Continents, *relates a Seneca Chief'sresponse to the efforts of a White preacher to convert his people toChristianity: (can also be accessed at this URL http://www.danielnpaul.com/HistoryItemsAndCommunityEvents.html

"In a scene reminiscent of the debate between Franciscans and Aztec priests nearly 300 hundred years before, the formidable Red Jacket rose to reply. His answer is one of the best ever given to Christianity's claims. Which mentality, he makes one wonder, is the more primitive: that which believes itself to have a patent on truth or that which pleads for culturaldiversity, for tolerance, for mutual respect?" Wright 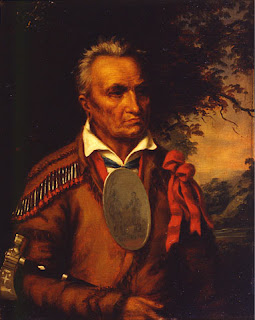 Chief Red Jacket's words: "Brother ... listen to what we say. There was a time when our forefathers owned this great island. Their seats extended from the rising to the setting sun. The Great Spirit had made it for the use of Indians. He had created the buffalo, the deer, and other animals for food. He had made the bear and the beaver. Their skins served us for clothing. He had scattered them over the country, and taught us how to take them. He had caused the earth to produce corn for bread....
If we had some disputes about our hunting ground, they were generally settled without the shedding of much blood.
But an evil day came upon us. Your forefathers crossed the great water and landed on this island. Their numbers were small. They found friends and not enemies. They told us they had fled from their own country for fear of wicked men, and had come here to enjoy their religion. They asked for a small seat. We took pity on them, granted their request; and they sat down amongst us.
We gave them corn and meat; they gave us poison in return. The white people, Brother, had now found our country. Tidings were carried back, and more came amongst us. Yet we did not fear them. We took them to be friends. They called us brothers. We believed them, and gave them a larger seat.
At length their numbers had greatly increased. They wanted more land; they wanted our country. Our eyes were opened, and our minds became uneasy. Wars took place. Indians were hired to fight against Indians, and many of our people were destroyed. They also brought liquor amongst us. It was strong and powerful, and has slain thousands.
Brother, our seats were once large and yours were small. You have now become a great people, and we have scarcely a place left to spread our blankets. You have got our country, but are not satisfied; you want to force your religion upon us.
Brother, continue to listen. You say that you are sent to instruct us how to worship the Great Spirit agreeably to his mind, and, if we do not take hold of the religion which you white people teach, we shall be unhappy hereafter.
You say that you are right and we are lost. How do we know this to be true?
We ... only know what you tell us about it. How shall we know when to believe, being so often deceived by the white people?
Brother, you say there is but one way to worship and serve the Great Spirit. If there is but one religion, why do you white people differ so much about it?... Brother, we do not understand these things. We are told that your religion was given to your forefathers, and has been handed down from father to son.
We also have a religion, which was given to our forefathers, and has been handed down to us, their children. We worship in that way. It teaches us to be thankful for all the favours we receive; to love each other, and to be united. We never quarrel about religion.
Brother, the Great Spirit has made us all, but he has made a great difference between his white and red children. He has given us different complexions and different customs.... Since he has made so great a difference between us in other things, why may we not conclude that he has given us a different religion?... Brother, we do not wish to destroy your religion, or take it from you. We only want to enjoy our own."
Posted by Sheilia at 9:33 AM No comments: Links to this post

Sheilia
Proud Mixed Blood: Potawatomi, Cherokee, Welsh, Scottish, Dane. The preservation of our cultures, wisdom, knowledge is VERY important to me. I am very proud of all of the facets of my Lineage, but the Native part of my blood is also the strongest part of my Spirit. I have struggled to feel accepted by all sides of my Ancestry. I refuse to discuss blood quotients or define my eligability by them. I am not asking for anything physical. Just acceptance. Being raised off the reservation is not always an advantage. After their forced removal & subsequent travel accross North America, my Ancestors suffered ignorance, racism, abuse, death, alcoholism, mental illness, diabetes, addictions, poverty, obesity, food & environmental allergies. I believe almost all of these "symptoms" are a result of their forced seperation from their land, culture, families, medicine and religion for so many generations. As I have my whole life, I am endeavoring in some way to restore that Native Peace to myself & my family.

Promote Your Page Too